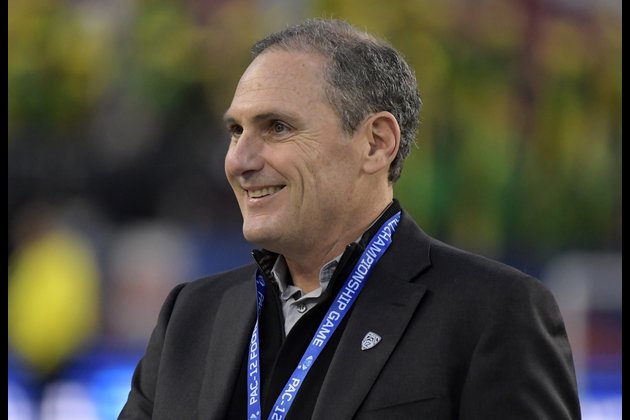 After an 11-year run as Pac-12 commissioner, Larry Scott will leave his post on June 30.

The conference announced Tuesday that Scott, the governing executive committee and school presidents reached a mutual agreement not to pursue a new contract. Scott had been under contract until June 2022, but he will exit a year early after aiding in the transition to his successor.

Schill said in a statement, "We appreciate Larry's pioneering efforts in growing the conference by adding new competitive university programs and accelerating the Pac-12 to television network parity with the other conferences. At one point, our television agreement was the most lucrative in the nation and the debut of the Pac-12 Network helped deliver our championship brand to US and global markets on traditional and digital platforms.

"That said, the intercollegiate athletics marketplace doesn't remain static and now is a good time to bring in a new leader who will help us develop our go-forward strategy."

Scott said in a statement, "I was in pro sports for 20 years, I've now been in college athletics for more than 10 years, and now is a great time in my life to pursue other exciting opportunities. This moment, when college athletics are moving in a new direction and with the Conference soon commencing the next round of media negotiations, it seems the right time to make a change.

"It is important that the conference be able to put in place the person who will negotiate and carry out that next agreement.

"Based on the recent robust valuation and marketplace interest we've received from traditional and nontraditional media organizations, I am confident the conference is well-positioned for continued success. I appreciate the support of the Pac-12 member institutions and a very talented staff, with whom it has been my privilege to work."

According to multiple media reports, the Pac-12's television contracts with ESPN and Fox will expire after the 2023-24 season.