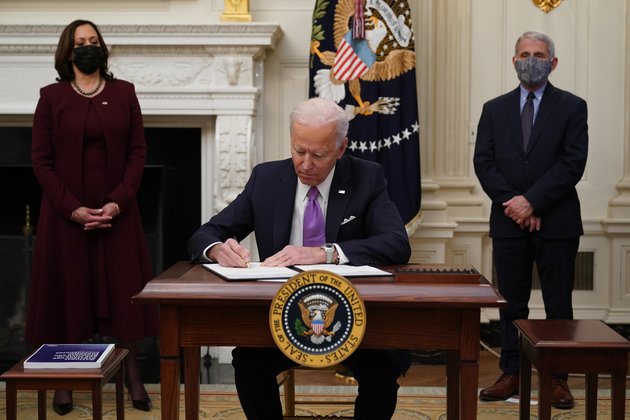 WHITE HOUSE - Total deaths from the coronavirus pandemic in the United States "will likely top 500,000 next month," President Joe Biden warned Thursday, as he explained his government's plan to curb the toll the disease has been taking on Americans.

A booklet titled "National Strategy for the Covid-19 Response and Pandemic Preparedness" rests on a table in the White House, Jan. 21, 2021.

Biden, in the White House Roosevelt Room, held up his 198-page plan in front of a group of reporters, flanked by Vice President Kamala Harris and his top medical adviser on the coronavirus, Dr. Anthony Fauci, before signing 10 executive orders related to it.

The president's goal is to vaccinate 100 million Americans within the next 100 days. Some 100 federally supported community vaccination centers are to open across the country within the next month.

"This will be one of the greatest operational challenges our nation has ever undertaken," noted Biden.

After he signed the orders, which include requiring international travelers heading to the United States to produce proof of a negative COVID-19 test, Biden was asked by a reporter if his goal of 100 million shots in 100 days is high enough.

People wait in line to be vaccinated at a super vaccination station set up in an empty department store during the outbreak of the coronavirus in Chula Vista, California, Jan. 21, 2021.

"When I announced it, you all said it's not possible. Come on, give me a break, man," the president responded testily. "It's a good start - 100 million."

Fauci later told reporters during a White House briefing that "it's quite a reasonable goal."

Sixteen million Americans have been inoculated so far - fewer than the 20 million that health officials in the administration of former President Donald Trump had promised to have vaccinated by the end of December.

During the past year of his predecessor's administration, Biden said, "we couldn't rely on the federal government to act with the urgency and focus and coordination we needed."

Biden said "the tragic cost of that failure" has been thousands of deaths per day and more than 24 million Americans infected with the coronavirus.

Outgoing Health and Human Services Secretary Alex Azar defended the Trump administration's handling of the pandemic Thursday, saying its collaboration with the Defense Department and the private sector had "brought therapeutics and vaccines to the American people in record time."

The pandemic has killed more than 409,000 Americans, the most reported by any country, according to Johns Hopkins University.

To protect travelers, Biden is mandating mask-wearing in airports and on certain types of public transportation, including many trains, airplanes, maritime vessels and intercity buses. On Wednesday after assuming power, he also ordered mandatory face mask-wearing on U.S. government property.

The orders Biden signed on Thursday are buttressed by his request to Congress for $1.9 trillion in new coronavirus relief aid.

White House press secretary Jen Psaki said Biden and Harris will "be quite involved" in the days ahead with lawmakers of both parties to push the legislation.

Trump, who frequently sought to play down the severity of COVID-19, left much of the pandemic planning to individual states, which has resulted in a patchwork of policies across the country.

That led to widely varying decisions on school and business closings and restrictions, and whether to require people to wear face masks.

State governments have been complaining they are not getting enough vaccine doses, even as the national government has expanded the categories of people eligible for the shots.

A vaccination center at the Abraham Lincoln High School is closed, in New York, Jan. 21, 2021, as the city waits for more vaccine supplies.

Starting next month, the Centers for Disease Control and Prevention is to make vaccines available to local pharmacies. Currently, most shots have been administered at local government centers or given to the elderly at nursing homes.

And the federal government's departments of education and health are to "provide guidance on safe reopening and operating for schools, child care providers and institutions of higher education," according to the White House, which says "science will be paramount" in decision-making.

Federal agencies are to collect data about the closing and reopening of schools so that officials can better understand the impact on families with low incomes, students of color, English-language learners, students with disabilities and others.

Biden's new orders on his first full day in office come after he told the World Health Organization that he would reverse Trump's withdrawal from the agency.

"America's withdrawal from the world stage and retreat from the World Health Organization has impeded progress on the global COVID-19 response and left the United States and the world more vulnerable to future pandemics," the White House said.