We were at COP26: It had mixed results 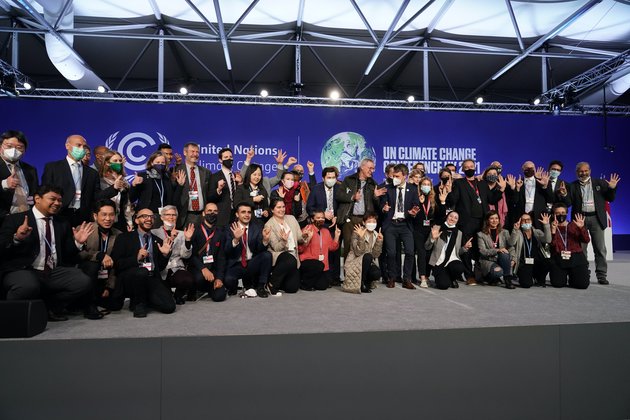 The recent COP26 was eagerly awaited. Originally planned for 2020, the event was postponed due to the COVID-19 pandemic. It was also meant to be a major step toward implementing the Paris Agreement.

According to the Sixth Report of the Intergovernmental Panel on Climate Change (IPCC) published in August 2021, the climate crisis has never been more urgent. A couple of weeks after the summit and the adoption of the Glasgow Climate Pact, it's time to look back at the event, both on paper and on the ground.

We are researchers in environmental law and governance from the University of Ottawa and the University of Cambridge. Three of us were on site in Glasgow and had the privilege of observing COP26 first-hand for the Centre Quebecois du droit de l'environnement (Quebec Centre for Environmental Law).

COP26 had a strange flavour, having been organized in the middle of a pandemic. Preparations were marked by complexity and uncertainty, and access issues were omnipresent.

Physical access to the site was a challenge from the start. The combination of health restrictions and security measures meant that there were long waiting times for many participants, sometimes up to several hours.

The congestion was predictable: the event had a single entry point. Nearly 40,000 accreditations were distributed, while health restrictions meant that the capacity of the venue was limited to about 10,000 people. The access issues quickly turned into equity ones.

First, there were incidents about accessibility standards. There was also criticism of the obstacles that delegates from developing countries faced in getting to the negotiation tables.

Travel restrictions, visa problems, access to the COVID-19 vaccine and affordable lodging explained why several countries and citizens' movements were absent, making this COP even more exclusive than past ones. The presence and role of Indigenous representatives also became points of contention in public debates during the event.

In addition to access issues, there were ones of transparency, since obtaining accreditation did not guarantee access to critical discussions. For example, Canadian observers were not allowed to attend Prime Minister Justin Trudeau's press conference. Discussions about Article 6 of the Paris Agreement also provoked debates about the inclusion of observers in the negotiations.

Were the negotiations a success or a failure?

Under the Glasgow Climate Pact, states did not adopt new commitments to reduce greenhouse gas emissions. They do now recognize - following recommendations by the IPCC - the importance of reducing global emissions 45 per cent by 2030 compared to 2010 levels, and of achieving carbon neutrality around 2050.

However, there is still a huge gap between these targets and the commitments states have made to date. That could lead to an overall increase in emissions of 13.7 per cent compared to 2010 levels. The fact that only 112 states have updated their nationally determined contributions (NDCs) is also worrying.

Read more: COP26: How the world will measure progress on the Paris climate agreement and keep countries accountable

States that have not provided the required update this year are invited to do so as soon as possible before the next COP. While the fact that the 1.5 C degree temperature increase target remains "alive" is a positive sign, concrete measures to achieve it are still lacking.

One of the most important advances made at COP26 was the mention of fossil fuels and coal in the pact. Indeed, for the first time, the elephant in the room was included in the outcome of a COP. Parties are called upon to accelerate efforts to "phase down" unabated coal power and to phase out "inefficient" fossil fuel subsidies.

It was about time, even if the wording of the text was weakened at the last minute. The strong presence of fossil fuel lobbies during the negotiations must be noted.

Read more: Climate change denial 2.0 was on full display at COP26, but there was also pushback

COP26 was also an opportunity to launch or strengthen certain alliances between states. This was the case, for example, of the Powering Past Coal Alliance, co-founded by Canada, which aims to eliminate unabated coal power. It now has 165 members (national governments, regional governments and various organizations), including 28 that joined during COP26.

Another example is the Beyond Oil and Gas Alliance, which aims to phase out the use of fossil fuels. Quebec joined, but not Canada. Finally, some 20 states, including Canada, have committed to ending new international fossil fuels subsidies.

These agreements, which are concluded in parallel to the main negotiations, may allow states to take action on issues where there is still no international consensus.

3. Missed targets to support the South

At COP15 in Copenhagen in 2009, developed countries pledged to financially assist developing countries in mitigating climate change by mobilizing a variety of financial sources amounting to US$100 billion per year by 2020. Unfortunately, this target was missed.

Canada and Germany did show some leadership in mobilizing new funding to help vulnerable countries adapt. Indeed, Canada announced at the G7 Summit in June that it was doubling its climate finance to $5.3 billion over five years.

Recognizing the failure of developed countries to stick to their financial commitments, the Glasgow Climate Pact urges them to reach the US$100 billion yearly target as soon as possible, pending the adoption of a new and much more ambitious target in 2025. At the same time, developed countries are urged to at least double their contributions to climate change adaptation in developing countries.

During the climate finance negotiations, developing countries and island states called for the establishment of a mechanism to finance the loss and damage resulting from climate change. The Glasgow Climate Pact does not satisfy this demand. It only calls for "dialogue" on the issue and mentions the allocation of funding, as yet unknown, to the Santiago Network.

COP26 therefore marks broken promises on climate finance, and did not bring new and specific targets to help vulnerable countries, developing and island countries in particular, cope with the climate emergency although their needs are growing exponentially.

One of the key objectives of COP26 was to develop the rules for emissions trading based on Article 6 of the Paris Agreement, which allows countries and companies to buy credits generated by others and to subtract these from their own emissions inventories.

Parties were unable to adopt the necessary rules at COP24 in Katowice or at COP25 in Madrid. Their adoption in Glasgow can therefore be considered a success.

One can be more critical of the Glasgow outcome in terms of the impacts that some emissions-trading projects may have on local communities. Since COP21, several proposals have been made on this issue, including the possibility of creating a human rights-based appeal against the certification of projects aimed at removing emissions.

Indeed, as shown by cases in Chile and Panama, many credits allowed under the Kyoto Protocol are associated with rights violations. An appeal mechanism was adopted in Glasgow, but it is fragile. With non-governmental organizations such as Amnesty International sounding the alarm, the purchase of carbon credits by governments, companies and individuals in Canada is far from a straightforward option for achieving net-zero emissions.

Already looking ahead to the next COP

According to the COP26 presidency, while "Paris promised, Glasgow must deliver." It is clear that Glasgow did not deliver on everything. COP26 did see some progress and new announcements, but the national commitments - in addition to having to pass the implementation test - fall far short of what science requires.

The 1.5 C degree target is still alive, but one wonders how long it will survive. Various estimates produced before and during the negotiations to take new commitments into account predict a temperature rise of 1.8 C to 2.7 C. Yet measures to meet these commitments are often missing.

We are a long way from achieving the 1.5 C degree target, which would still have very serious consequences for our societies and an even greater impact on the most vulnerable countries, groups and individuals.

In addition to the health challenges that are once again on the horizon, COP27, which takes place in Egypt next year, promises to be a major meeting as the UN Convention on Climate Change marks its 30th anniversary. Given the lack of progress since the 1992 Earth Summit, the primary focus of COP27 should be the achievement of the numerous goals and targets that have been announced over the years.